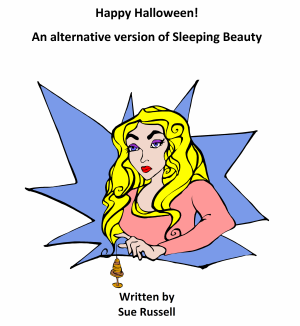 Happy Halloween Assembly. I originally wrote this script for PSHE as the message behind it is ‘always remember to say thank you’. I have adapted it to give it for Halloween. It can also be used at Christmas – a truly versatile script

Happy Halloween Assembly. I originally wrote this script for PSHE as the message behind it is ‘always remember to say thank you’. I have adapted it to give it for Halloween. It can also be used at Christmas – a truly versatile script

Cast Size: 15 upwards. Duration: Around 15 minutes not including music suggestions.

(Whole cast files in, taking their places, where they promptly nod off to sleep)

Narrator:             (Sarcastically) Well, you don’t say! I had actually already leapt to that amazing conclusion myself! So, how am I meant to put on a play, this morning? I hadn’t reckoned on it just being me!

(To audience) I mean, does she look like the type you can trust? (Shaking head)

Wicked Fairy:      (Furiously) There you go again! Judging someone by their appearance! You (pointing at the narrator and audience) should be ashamed of yourselves!

(Aside to audience) And let me tell you, he’s no Michael McKintyre!

Or doing the sensible thing – and working with me?

Narrator:             OK! OK! You win. (Looking at watch) Now, could you do whatever you’re going to do rather quickly otherwise this audience is going to walk!

(Wicked Fairy flicks her wand in the direction of the cast and they all wake up, rubbing their eyes and yawning)

Narrator:             Phew! Now we can get on with the show! So, whilst this lot wake themselves up a bit, I’ll tell you a little about today’s performance! It’s rather a nice story

Wicked Fairy:      Poor misguided fools! Have they no idea how much trouble children can be?

Narrator:             But I must insist you desist from hijacking this show! This is a nice story

Wicked Fairy:      So you said! And you know what? Nice really doesn’t do it for me!

Narrator:             (Impatiently) Well, that’s just too bad! For your information, wicked doesn’t do it for me! (Looking pleased with himself) Ha! Ha! Touche!

Wicked Fairy:      (To audience) See what I saved you from? And it’s not just his one-liners that get worse!

Wicked Fairy:      Very well! But you will pay for your ill manners! Not so much as a thank you for my troubles? (To the audience, stage whisper) Never fear, my revenge will be sweet! As Halloween approaches, a witch’s powers grow – getting greater and greater! (Pauses) Oh … hadn’t you guessed? This ‘Wicked Fairy’ thing is just a front – a disguise. I’m really a witch … and a very wicked one at that! See you around!