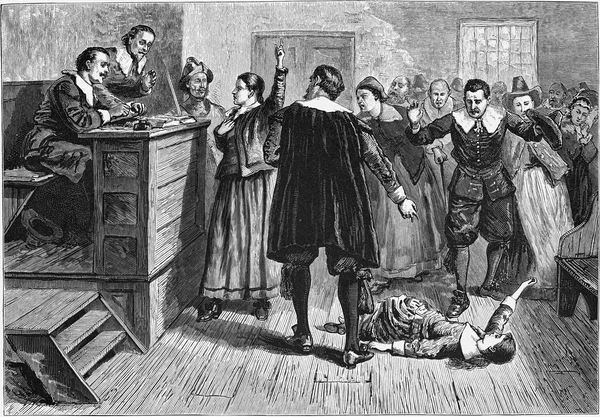 The Salem Witch Trials Guided Reading Play Scripts. Boredom, over-active imaginations and a certain flair for amateur dramatics – all fatally combined to produce one of the cruellest travesties of justice in U.S. history. 19 hangings of complete innocents, labelled as witches … by children. Who, or what, was to blame? Sift through some very suspect evidence and draw your own conclusions, from this set of guided reading play scripts, covering the course of those infamous events.

Sarah Good:       And I wasn’t? Good by name and good by nature, that was me – until you and your friends blackened my reputation.

Sarah Good:       According to you, a mere child! Whoever heard of taking a 9 year old’s word against an adult’s?

Sarah Osborne: And a bored 9 year old at that, with nothing better to do than spread trouble.

Sarah Osborne: Barking and howling! Oh we saw them all right – along with everyone else in those crowded trial rooms!

Bridget Bishop (First to be hanged)

William P:       But that’s no basis for hanging someone! Where was your evidence?

Elizabeth Proctor (saved from hanging because of pregnancy)

Mather:           5 more witches hanged in July, and another 5 in August! Not bad … (pauses) though when I think of all those others waiting in jail I can’t help wishing they’d speed things up a bit!

Burroughs:      Have you no conscience? Fancy using our great calling to such awful ends!

Burroughs:      But I would never have abused my position like you did!

Rebecca:         Preaching all that fear and hatred! What were you thinking?

Martha Carrier:          Or perhaps I could re-phrase that question to “What in the name of the Devil has been going on here?

Martha Carrier:          No more specter sightings! What were you girls going to find to occupy your time in the future!

Play 5 History’s Verdict – Who was to blame?

Robert Calef (Writer of “More Wonders of the Invisible World” – an account of the trials, published 1700)

Calef:               Indeed. You could be forgiven for placing all the blame at their door. But let’s not forget the kind of lives these girls were living.

Stoughton:       Distractions? You call these hangings distractions? Just what kind of upbringing did you have?

Betty:               A very tough one, as it happens. We were allowed no games and the Bible was the only book we could read. The rest of our time was filled with carrying out boring old household chores. What kind of a life was that for a child?

Rev. Parris:      Silence, child! Was that strict upbringing for nothing? At least you had food in your belly and a roof over your head.