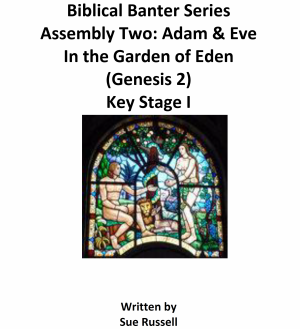 This is the second in my Biblical Banter series – this script written in 2 versions, for both KS I and II ..the Key Stage I version just a simplified version of the KS II one.

Take advantage of Buy 2 Get 1 Free Offer – drop me a line on sue@oldsite.plays-r-ussell.com for details

Duration: Around 5 – 10 minutes reading time – double this for inclusion of songs/music.

Cast of 30 – though this could be reduced right down to 5, as explained in Production Notes (only 7 actual speakers – rest part of Animal Kingdom, Circle of Life, routine)

Interesting choice of music – including Barbie Doll and Something Wrong in Paradise ….. not forgetting, of course, ….. Temptation!

This is the third in a collection of Bible stories – the others (The Creation, Noah’s Ark, Jonah and the Whale) are also available.

Adam and Eve in the Garden of Eden Sample Text:

(Serpent sidles back onto stage)

Serpent:               Number one! (Glaring at Narrator) Nobody ssssssstealsssssssss my linessssssss. Number 2, what’sssssssssssss with the booing?

(Narrator looks at his script)

(Serpent sidles over and helps Eve to the ground)

(Eve throws apple back to Serpent)

(Serpent throws apple back to Eve)

Music 6 Trust in me – Jungle Book

(Serpent hypnotises Eve into a trance; she then eats the apple)

(Serpent starts to sidle off)

(Eve tries to hide apple behind her back)