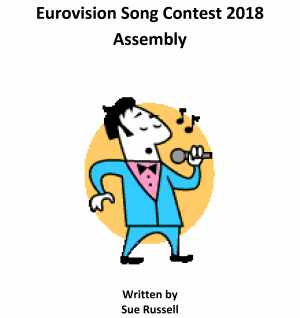 Maybe this year – a few more points for Grande Bretagne?!

Eurovision Song Contest Assembly – updated to 2018. It’s that time of year again! Get ready for the funniest show on earth! (Does anyone really take it seriously?!) This assembly gives a quick chronological run through past winners … and losers! How can, for example, the UK get it so right … and yet so desperately wrong! A light-hearted coverage of all UK winning songs (and runners-up) plus such greats as Abba. The song list is memorable – for all the right reasons!

Cast size 30 – easily adaptable up or down. Duration: 15 – 30 minutes (depending on number of songs chosen)

Narrator:             Wow! What a hit that was! It certainly launched Abba into a glittering rock career!

(Loud whinny from Kara the horse)

Then it happens again the following year – this time to my mates The Shadows!

Music 8 Let Me Be the One – The Shadows

(Judge charging back onto stage)

(Turning to cast) Are we agreed?

Music 9 Save Your Kisses for Me – Brotherhood of Man

Presenter:          And you do get to host the Eurovision Song Contest the following year

Presenter:          Having difficulty making your mind up?

(To Judge) Don’t you agree?

Presenter:          Though there are times when you might wonder whether certain countries actually want to win?