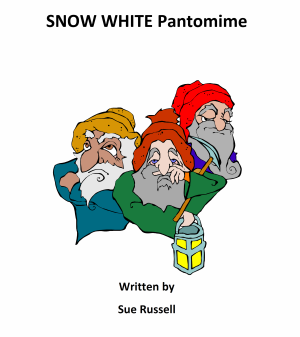 Snow White Pantomime is a Snow White as you’ve never seen it – twists and surprises all along the way, perhaps some of the worst jokes you’ll hear this year – and what about The Mirror … checking out Facebook!?!

Snow White Pantomime is a Snow White as you’ve never seen it – twists and surprises all along the way, perhaps some of the worst jokes you’ll hear this year – and what about The Mirror … checking out Facebook!?!

This Snow White pantomime can be:

10 minutes, 35-45 minutes or an hour long! It can also be for a cast of 30 or 60! All explained in copious Production Notes – no stone left unturned in this one! Arguably the most versatile pantomime out!

Snow White Pantomime was Originally written for a cast of 30, as a simple production, it now comes as an all-dancing all singing panto – with an additional 22 elves, Rudolf, Santa and a few reindeer thrown in! This script is the longest I have written to date.

I also have a collection of individual pantomimes designed for school production:

Don’t forget a Free set of Christmas Jokes available off the Specials section of the website.

(Mirror awaiting the arrival of Wicked Queen, scanning pages of Facebook on a laptop computer)

Who is the fairest of them all?

Wicked Queen: (Impatiently) Yes, yes. I know! But am I THE most beautiful?

Wicked Queen: What do you mean, ‘but’?

Wicked Queen: But how can that be? She’s dead!

Mirror:                  Not according to Facebook, she’s not! You want to take a look at these pictures! Talk about party creature! This one sure knows how to enjoy herself  – over fifty men guests at her place last time I looked!

Wicked Queen: Good grief! That doesn’t sound like the Snow White I know! Perhaps she’s becoming more like her stepmother after all! Fifty fellas, eh? Where did you say this party was?

Wicked Queen: What? And miss a party? You know me better than that! (Aside) Course, for the sake of our story, my reasons for going are strictly business  – to finish off Snow White. But hey! Why not have a little fun on the way?

Music 8:  So here it is, Merry Christmas – Slade (in the background, as scene set up – everyone joining in with the chorus)

Snow White:      (Laughing) That’s all right! It’s great that we’re all getting in the Christmas spirit!

Friendly:              (Coughing) Hmm. In all senses of the word. (Taking Brandy bottle off Elf 19) I think I’d better take that! I think some of us have more than enough spirit in their bellies!

Snow White:      I’m just helping out with the housework! Friendly, here, has shown me how much fun it can be!

(Sound of sleigh bells and snorting)

Snow White:      (Impatiently) Who cares! Come on, let’s have some jokes! That Santa Claus sure looks like he needs cheering up!

(Elf 11 shares scraps of paper out amongst elves)

So, as I was saying (glaring at Elf 21) before I was so rudely interrupted, What’s the difference between the Christmas alphabet and the ordinary alphabet?

Plus another 9 great songs!

Be the first to review “Snow White Pantomime” Cancel reply