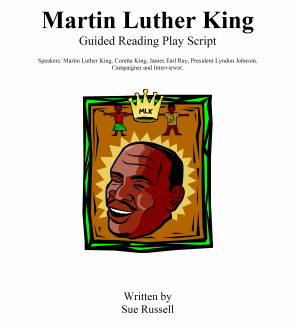 Martin Luther King Guided Reading Script plus quiz is part of a set of 5 guided reading scripts available off the website. The other 4 ‘mini plays’ are on Nelson Mandela, Mahatma Gandhi, John Lennon and Famous Women of the 20th Century (including Mother Theresa, Anne Frank, Marie Curie, Helen Keller, Maggie Thatcher and Princess Di). This set can be found under the History section of Guided Reading Scripts: Famous People of the 20th Century.

Martin Luther King Guided Reading Script plus quiz is part of a set of 5 guided reading scripts available off the website. The other 4 ‘mini plays’ are on Nelson Mandela, Mahatma Gandhi, John Lennon and Famous Women of the 20th Century (including Mother Theresa, Anne Frank, Marie Curie, Helen Keller, Maggie Thatcher and Princess Di). This set can be found under the History section of Guided Reading Scripts: Famous People of the 20th Century.

Also available, a class play on the life of Martin Luther King (cast of 30). This can be found by clicking on UK catalogue – Assemblies – History or PSHE; or USA catalogue – Traditional Class Plays – Social Sciences.

Linked to History Unit 20: What can we learn about recent history from studying the life of a famous person & Citizenship Unit 5: Living in a Diverse World

Interviewer:     I feel honoured, and humbled, to speak to you, Martin Luther King.

King:               Thank you. But we are all equal – that was the message I spent my life trying to spread. Everyone can be great. I feel privileged to have been able to play a part in the struggle, along with many others, for civil equality, at a time when the odds were heavily stacked against black citizens.

Interviewer:     But that was the wonderful thing. You brought about change through peaceful means, just like Gandhi in India.

Ray:                 That was me, apparently, though it remains in doubt, even today. King did make a lot of enemies during his life, especially when he became such a huge figure in politics towards the end.

Johnson:         Without his support in the elections, I might never have been president. I will always be grateful to him.

Campaigner:    And we to you, for passing the Civil Rights Act.

Johnson:          An Act which was introduced by Senator John Kennedy, another huge fan of yours.

Coretta:           And another tragic loss to the world, through yet another assassin’s bullet, again in very suspicious circumstances.

Ray:                 Yes, the killer was allegedly someone called Lee Harvey Oswald. But it was never proved, and it was said he was himself killed to hide the true killer’s identity.

King:               We’ll never know. But it certainly showed how much violence and hatred there was in American society. A tragic reflection of the times.

Campaigner:    But let’s not forget all you achieved in your lifetime. You may not have removed all the ills of the world, but you certainly made a difference to black civil rights.

Coretta:           Yes, my husband enabled us to walk around with our heads held high. We were no longer made to feel ashamed of our skin colour.

Interviewer:     Yes, indeed. That Civil Rights Act we spoke of ended all segregation in public places.

King:               About time! When I was growing up, we had to use different shops, schools, buses – all sorts of things. Whites and blacks led totally separate lives.

Campaigner:    But it wasn’t as bad as that elsewhere in America. It was just particularly bad in the South, where people still thought back to the days of slavery.

Coretta:           You will remember the Southern states would not give up their slaves without a real fight, in the Civil War. And even then, they still regarded people who came from Africa, as being inferior.

Campaigner:    It’s called prejudice, and many white folk found it difficult to accept equality for all. Some whites didn’t  like having to travel with black people.

Interviewer:     No, it used to be common practise that if a white person got onto a bus, a black person had to stand up and let them have their seat! Outrageous!

Campaigner:    That was why the Civil Rights Movement began in the 1950s. Black people at last began to stand up for themselves.

Johnson:          Yes,  a young lady called Rosa Parks, when travelling home from work on the bus one night, refused to get up and give her seat to a white man who had just got on. She was then arrested ..

Campaigner:    Yes, and that was just the beginning. It took a lot of patience. We were up against white ministers, mayors, governors, police chiefs and judges, all telling us to “Wait”. But we were tired of waiting.

Campaigner:    We sure weren’t going to wait any longer. It was time to change things for ourselves, by ourselves!