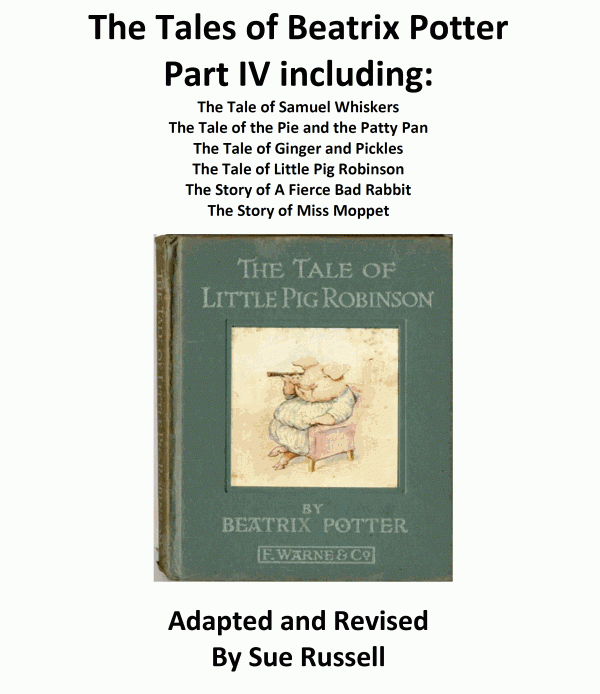 These plays are simple adaptations/conversation pieces based on Beatrix Potter’s tales, for use within the classroom. They can either be used as group readers or combined to create a whole class play/assembly.

This is the fourth and final part of a four-part series of plays including:

These six scripts are generally shorter than the scripts in the rest of the collection – especially the last two which hardly qualify as tales. There are a total number of 30 speakers. And unlike Parts I, II and III there are no question and answer sections

These plays are simple adaptations/conversation pieces based on Beatrix Potter’s tales, for use within the class room. They can either be used as group readers or combined to create a whole class play/assembly.

If only Tabitha had been a more disciplined parent! Easy enough to say after the event but nobody wants to end up as a dumpling! Not even the naughtiest of kittens – who probably deserved it!

Narrator: Cats, rats and a dog – this should be lively!

Mrs. Ribby: I blame the parents!

Tabitha: You would! So easy to judge others

Tabitha: (Petulantly) Well, it’s true! What would she know about bringing up three naughty kittens?

Mrs. Ribby: Try asking yourself why they were naughty?

Old man rat: We should know! We’re rats! Nobody ever gives us a second chance!

John Joiner: Well, you do come with something of a reputation!

Old woman rat: Quite undeserved, for the most part!

John Joiner: Ooh, I don’t know about that!

Tom: Yeah! Think about what nearly happened to me!

Mrs. Ribby: Well, if you hadn’t been so naughty

Tom: (Interrupting) Hey! I wasn’t the only naughty kitten

Tabitha: No, there were my adorable Moppet and Mittens

Mrs. Ribby: Oh, there you go again! When, cousin, are you ever going to get your head around the fact they are not so adorable – they are plain bad!

Another favourite! Some great characters including the doctor, a magpie called Dr. Maggotty – who singlehandedly highlights the ridiculous behavior of the dog who was invited for dinner with the cat – as if that wasn’t a ridiculous enough scenario!

Narrator: Dogs and cats! Not usually the best of friends?

Ribby: Oh, but we were (pauses) that is, before the pie episode!

Duchess: Do not remind me! I was lucky to escape with my life!

Dr. Maggotty: Oh please, let us not be overdramatic. What a drama queen you are! Nobody’s life was ever at risk!

Duchess: Well, that’s not what I thought at one point in the tale

Narrator: So, let us hear the whole tale so we can decide for ourselves.

Ribby: Very well. We’d best start with the invitation I sent out

Duchess: To me! To join Ribby (pauses) in eating her pie.

Narrator: Sounds very amenable to me. What could you possibly object to?

Duchess: Just the small matter of what was going to be in that pie.

The Tale of Ginger and Pickles (tale number 18)

Maybe a lesson for any would-be entrepreneurs – not given .. to taking money!

Narrator: And so to our next tale which (pauses) well, I hate to say it, but has to rank alongside that of Jemima Puddleduck in terms of sheer stupidity.

Henny Penny: I have to agree. I can’t think of many folk who’d do what you two did!

Pickles: (Sulkily) And what was that?

Narrator: You might need to explain that a little more

Henny Penny: Why, certainly. Since when does anyone give things away for free? If you’re running a business, you take money from your customers, right?

And so to the island of the Bong Tree .. eventually! And all because Aunts Dorcas and Porcas couldn’t stick to their diets forcing their nephew to navigate those ‘thin stiles’ – namely, Little Pig Robinson – the Crusoe and Owl and Pussycat bits to be found in ‘other publications’.

Narrator: So, what was he doing there at market, all by himself?

Aunt Dorcas: Oh dear, that was down to us.

Narrator: So you keep saying. But how?

Aunt Porcas: Entirely our fault. You see, neither of us are very (pauses)

Aunt Dorcas: (Interrupting) I think the word you are looking for is trim!

Aunt Porcas: We both carry a little extra weight around our middles

Aunt Dorcas: And those stiles around where we live are just too thin!

Narrator: Nothing to do with you being too stout? Sorry, it just had to be said!

Aunt Porcas: Oh dear, well there was no way either of us could squeeze through them

Aunt Dorcas: So we had no choice but to send our nephew instead!

The Story of A Fierce Bad Rabbit (tale number 20)

Short and sweet is perhaps the best way to describe these next two ‘stories’. A clear case of ‘good generally prevails’ with this first one.

Nice gentle rabbit: Snatching my carrot off me! And then scratching me!

Fierce bad rabbit: And what did you do? Ran off and hid in a hole! What a wimp!

Narrator: And you? I don’t seem to remember you coming out of this so well?

Man with a gun: He didn’t! You can thank me for that!

And so to the tail end (sorry, couldn’t resist!)

Cat and mouse games generally go the way of the mice – no exceptions here!

Narrator: So, no love lost between the two of you!

Miss Moppet: Not when that mouse teases me

Mouse: And not when that kitten tries to eat me!