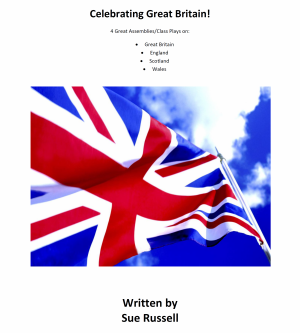 Celebrating Great Britain is a set of plays on Great Britain, England, Scotland and Wales was written with the intention of boosting our children’s awareness of their amazing country and culture.

Special discount price – 4 scripts for the price of 3

Each script tries to catch the essence of being – British, English, Scottish and Welsh – covering history and culture, through those best qualified to represent their nations.

This is an assembly written in celebration of Great Britain as a country – its culture and its people. It combines coverage of serious achievements, past and present, with a humourous look at our heritage. Narrated by Queen Elizabeth I (with a little help from her number II, 4 centuries on!) this play aims to present as comprehensive a picture as possible of what it is to be British – quirks and all! I have included mention of at least 35 Great Britons – I would like to have included many more but that would have doubled the length of the play(approximate running time 20 – 30 mins); and tried to capture just a little of our national character.

Elizabeth 1: I take it back! Who are this rowdy lot?

Shakespeare: It’s something called Football, m’lady. A strange national pastime, and for some, total obsession! Who would have thought kicking a ball around a rectangular strip of grass could inspire such passion!
Drake: Far livelier than bowls, that’s for sure!
Shakespeare: And there’s no way a game of football could be interrupted..
Elizabeth I: (Incredulously) Not even if your country was being invaded?
(Referee chasing two footballers, blowing his whistle)
Shakespeare: Probably not! Nobody would dare to stand in the path of:
(Each fan steps forward, waving team scarf)
Man. Utd fan: Manchester United!
Chelsea fan: Chelsea!
(Exit)
(Another referee runs past, chasing two rugby players)
Elizabeth I: Hey! Wait a minute! The ball changed shape!
Shakespeare: That’s because they’re playing rugby, m’lady!
Elizabeth I: Rugby?
Drake: Another popular sport. Though let’s not forget …
(Cricketer, clad in ‘whites’ steps forward, only to be jostled by the rugby players, running past again)
Cricketer: (Indignantly) Hey, I say!
Rugby player: Get outta the way!
Cricketer: (Exploding) Well, of all the …. That’s simply not cricket!
(Exit Cricketer and rugby players)
(Tennis player in ‘whites’ steps forward, brandishing tennis racket)
Tennis player: Anyone for tennis?
(Exit)