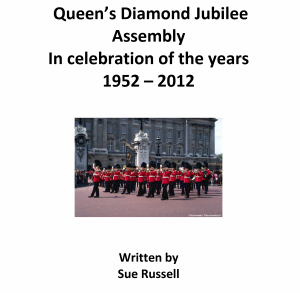 The Queen’s Diamond Jubilee assembly on the years 1952 – 2012 is an adaptation of my History of Rock n Roll assembly. This covers world events but with a musical twist (up to 34 suggested songs!)

This is one of three scripts now available on the Queen’s Diamond Jubilee. The other two are:

These scripts can be bought individually or as part of a special 3 for 2 package. Buy 2 scripts online, and let me know which one you want free – I will then send all three scripts to you.

(David Bowie and the Spiders from Mars walk on)

(Queen screams and covers her face with her hands. Narrator rushes over to placate her)

Narrator:         Now, now, Your Majesty. Nothing to worry about! They might look weird but they’re really quite harmless!

(Aside) when he’s not biting off heads of bats … or was it chickens?

(Alice Cooper performing, rest of cast joining in and cheering)

Narrator:         Stop! Stop! We can’t have this anarchy! Not when we are entertaining our most gracious sovereign queen! I do apologise, Ma’am. I think our next ‘guest’ will be far more to your liking!

(Stage invaded by screaming fans, chasing Donny and David off)

Narrator:         Hmmm. Shame about the fans! Still, things did seem to be getting quieter!

Narrator:   Oh no. Just when I thought things were getting better. These boys! What we need are some nice young ladies.

Music 18 Can the Can – Suzi Quatro

Bob Marley:    Hey man. Take a chill pill. We weren’t all crazy in the 70s you know. Try a little reggae to sooth your brow, bro’!

Narrator:         (Effusively) I’m so sorry, Your Majesty! I had no idea this punk band were performing here today! Whatever next!

Queen:            What? Named after me? Ah, splendid! (Looks quizzically at Freddie Mercury’s black leather trousers) Mmm. Not quite sure about the trousers ..

And cinemas everywhere rock to the sounds of Grease and