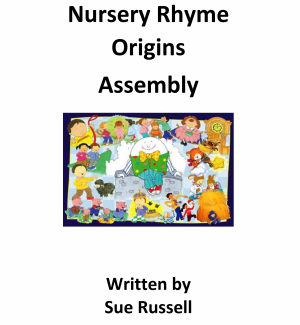 Humpty Dumpty sat on the wall

Humpty Dumpty had a great fall.

(Aside to audience) I can see where the large head – make that ego – comes from!

But do tell us about this cannon!

Humpty Dumpty:         Not a lot to tell, really. Apparently used in the English Civil War, placed on a wall, and, well, I don’t need to tell you the rest!

There was an old woman who lived in a shoe.
She had so many children, she didn’t know what to do;
She gave them some broth without any bread;
Then whipped them all soundly and put them to bed.

(Aside to audience) I’ve no doubt we’ll be hearing from social services!

(Old Woman waves stick at Narrator who backs away quickly)

(Looks around) It would seem some of them got away! Grrr!

(Old Woman flails around with her stick)

Where are the little blighters?