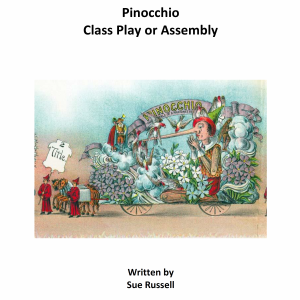 Pinocchio class play. A story of redemption and self-discovery – with one small twist! Duration – 40 minutes plus (the script has been divided into 4 plays of approximately 10 minutes each)

Pinocchio Class Play or Assembly is story of redemption and self-discovery – with one small twist! Small but significant seeing as the whole plot hinges on it!

A cast of 24 plus – may be increased with the inclusion of music suggestions.

Duration: Around 40 minutes plus, with the inclusion of all music suggestions. The duration can, however, be reduced to around 20 minutes if the music is left out.

The script consists of 4 scenes of 5 – 10 minutes reading time, each.

There is a music playlist of 15 songs but the choice of these is discretionary/do not need to be included.

Pinocchio script, a cast of 6, is also available; plus Pinocchio Pantomime which is an adaptation of this script i.e. lots of terrible jokes and a larger than life Fairy as Dame!

(Sound of whistleblowing, Pinocchio being chased by a policeman)

(Policeman grabs Pinocchio by his collar and holds him tight)

Policeman:      Hey! Where do you think you are going?

Geppetto:       (To Pinocchio) Oh there you are! What were you thinking, running off like that?

Policeman:      Gotcha! And such a sweet-looking old gent!

(To audience) They’re always the worst, the innocent looking ones! I just happen to know this due to my long and, it has to be said, quite remarkable service in the police force. Huh! Nothing escapes this hand of the law!

(To Geppetto) And you can come with me! To the nick!

(Exit Policeman holding Geppetto; Pinocchio goes off in opposite direction)

Narrator:         (To Audience) Well. You’d think any normal, decent, loyal, loving son would protest just a little more on his father’s behalf, wouldn’t you? After all, Geppetto was totally innocent and certainly didn’t deserve to spend a night behind bars.

Narrator:         Let’s watch. Surely there will be some signs of remorse. (Pauses) Some tiny show of concern for his father?

(Narrator gasps and shakes his head)

(Pinocchio spins round and nearly trips over the cricket in surprise)

Pinocchio:       A talking cricket? Whatever next!

Pinocchio:       And that’s my fault? No. I didn’t ask to be ‘chiselled’ into this world. I just found myself here.

Pinocchio:       (Aside) Oops. Something tells me that one could be a bit of a challenge!

(To Cricket) Hey, listen – sweet, caring cricketty creature that you are. I am rather tired and

This script was requested by a Community Theatre group in Australia, aged 8-16 years, who had previously used my other alternative fairy tale scripts – casts of 6 – combined into one production which was a huge success. The producer has kindly given me permission to share photos of the children performing Grimm Fairy Tales – A Re-Telling:

A Pantomime by Sue Russell; Directed by Melody Keating

Be the first to review “Pinocchio class play” Cancel reply