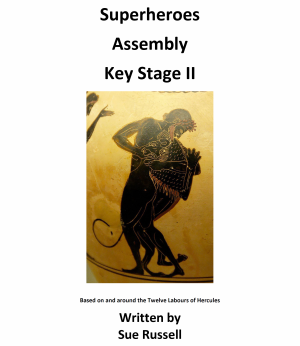 Superheroes Assembly. Our Narrator has faced some ‘mission impossibles’ in his time but a Superheroes Assembly without … Superheroes? Thank goodness there is always an Ancient Greek superhero around when you need him. But bringing out the ‘super’ in these particular heroes may prove too much of a challenge even for Hercules!

This assembly or class play is loosely based around Twelve Tasks of Hercules, taken on by a cast of phobia-prone and allergy-stricken ‘super’ heroes! Great playlist and great fun!

A cast of 30 – easily adaptable up or down. Duration: 15 – 20 minutes (without the inclusion of music suggestions)

Whilst I normally try to distribute speakers’ lines evenly – so each child has a similar verbal input, it is the case in this particular script that half the cast have largely if not completely non-speaking roles – i.e. just action as in the case of the various monsters that Hercules has to deal with.

Music 1 – Holding out for a hero – Bonnie Tyler

(Whole cast file in, in order of speaking, seating themselves along two rows of fifteen seats, facing the audience)

(Narrator turns round to face cast, speaking sideways on so that audience can hear)

Superhero 2:   If you want a show of superpowers here today, you’re out of luck!

Superhero 3:   More a case of what’s not going on!

Superhero 5:   And not feeling in the least bit ‘superhero-ish’!

Superhero 6:   Come back another day?

Superhero 7:   Well, sorry, but even superheroes have their off days.

Hercules:         Oh you don’t want to bother with those! Let’s go for a bit of good old fashioned spontaneity this morning!

Hercules:         Exactly! And who better to represent that magnificent race – than myself, the great Hercules?

Narrator:         Wow! You certainly were a superhero in your time!

Narrator:         (Heaving a great sigh of relief) Oh thank goodness for that! You could be just the superhero I need to save this assembly!

Narrator:         Well, I gather you’re rather used to taking on challenges – single-handed?

Narrator:         I have to get this lot (pointing to cast) up and demonstrating their superpowers. It is meant to be their assembly, after all!

Hercules:         (Looking at cast and shaking his head) You are kidding me? Did you say (pointing to cast) this lot?

Narrator:         Correct. Fraid they’re not in the best shape at the moment!

Hercules:         (Repeating, incredulously) Not in the best shape? Make that, not in any kind of shape! (Sighing heavily) Oh boy! Have I got my work cut out for me this morning!

Hercules:         You reckon? (Looking at cast) Let me tell you something. I don’t know about easy – I’m thinking, about as easy as climbing a mountain! And a very steep one at that!