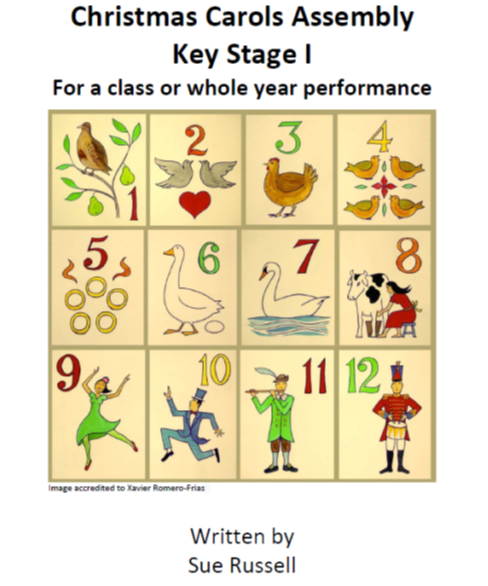 This script is the total moveable feast! It literally caters for any size cast and any length performance. This is achieved by including in one script, two!

This script is the total moveable feast! It literally caters for any size cast and any length performance. This is achieved by including in one script, two! One of duration approximately 15 minutes (depending on the number of carols included) and the other around double that – again, depending on the amount of ‘music content’. The Twelve Days of Christmas inclusion just lends itself to fun .. and chaos – so beware, maybe this should come with a public health warning! As an ex-teacher, I can just picture this one’s potential for entertainment – intended and otherwise!! But isn’t that what Christmas plays are all about? (Quick flashback to one I did – The Missing Star – where hilariously this proved to be the case!! A backstage experience that will remain embedded in my memory forever!)

A cast of whatever you want it to be (I’ve gone with 30 as a starting point but this can be reduced or increased to 100 plus!)

Narrator:             Jingle Bells was written by an American minister for his Boston Sunday school children – for Thanksgiving! It proved so popular it was taken up at Christmas!

(Pauses) But wait a minute! We didn’t get to sing those Twelve Days of Christmas! (Looking at cast) I can see we’re going to have fun with this! Take it away, children!

My true love sent to me

My true love sent to me

Narrator:             The author is unknown but the words are again from America! The Fa la la refrain was probably originally played on a harp.

(Sound of loud snoring from Child 18)

(Narrator walks over to Child 18 and wakes them up; then turns to rest of the cast, with fingers on lips)

Narrator:             Shhh! We’ll have none of that. (Pauses) Silent Night was written to be accompanied by guitar. This was because the writer, Austrian priest Joseph Mohr, discovered that the church organ was broken, one Christmas Eve, so hurriedly put together Stille Nacht so that his church wouldn’t be without music over Christmas.

Music 8 Away in a Manger (all six verses)

(Aside) What a shame we know better!