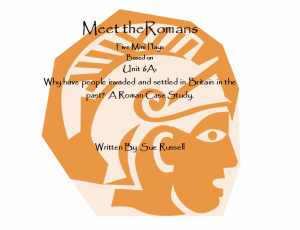 Meet The Romans, Unit 6A

Meet The Romans is a set of 5 plays, 6 speakers each, with a quiz. Each play introduces a different aspect of Roman life.

Meet The Romans, Unit 6A

Meet The Romans is a set of 5 plays, 6 speakers each, with a quiz. Each play introduces a different aspect of Roman life.

Claudius: And your spiky white hair? Did you really think we’d take one look at you and run?

Celt 3: Well that’s what happened with my first wife!

Caesar: I wonder why! No, we might have worn white dresses

Celt 1: What? Borrowed from your wives?

Celt 2: I told you they were a funny lot!

Celt 1: OK. So we’ve had the Veni, Vidi, Vici speech. Get on with it, man! Sometime this month, would be good!

Roman 1: But even these didn’t compare with our villas. Lots of rooms, around a courtyard, with verandahs overlooking the gardens. And those mosaics on our floors – they were to die for!

Celt 2: Huh! A few bits of chipped tile stuck together on the floor. To die for! How sad are you!

Roman 2: Well, it wasn’t just the way our floors were decorated. We had our floors and walls heated by a hypocaust. No smoke-filled room like you lot had to put up with. Our heating system was far more sophisticated!

Celt 3: A lot of hot air, you can say that again. Do these Romans never tire of the sound of their own voices?

Roman soldier: They cannot be serious! A woman leader? I don’t think so! It’s time this one learnt her place! Men! Take her to her house and punish her for her impudence! Do not spare her daughters either.

Roman General: And don’t forget to take everything that belongs to the Iceni.

Boudicca (angrily): But your promise to my late husband?

Roman General: If he’s late, that’s his problem. I like being on time – especially when it comes to breaking my promises!

Roman 3: No, no. Don’t you remember those hours of practising our moves?

Roman 4: You mean on the dance floor?

Roman 6: Yes, serious stuff. If just one of us moved out of turn, we could all end up in a heap!

Mars: My lovely Venus, goddess of love and beauty! How lucky to have her as my wife, and then Cupid as my son!

Mercury: Huh! Little love-god indeed! Little rascal more like! I mean, what kind of a mother lets her son go out shooting arrows from his bow, blind-folded?

Also available, a collection of plays  on Myths and Legends from Different Civilizations

Be the first to review “Meet The Romans” Cancel reply