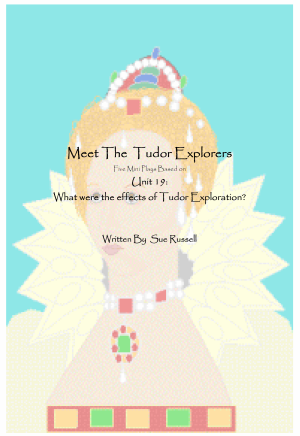 Drake: Hmm. Now, let’s think. What did Columbus, Frobisher and Cabot all have in common?

Could it be the illusive North-west passage?

Chancellor: How right you are! They all went to their deathbeds believing they had found Asia!

Magellan: Whereas they had actually stumbled upon the east coast of America!

Play 2 Meet The Tudor Explorers : Drake’s Round the World Voyage

Sailor 1: I’d laugh ..but I think he means it – look at these dog biscuits we just got served up!

art 2 can be used as a link with PSHCE  Unit 5 Living in a Diverse World – examining the plight of Native Americans.

Indian 5:  Those Europeans all conveniently forgot that we were here first.

Indian 6:  It was our land they took for their own.

Indian 1: Our buffalo they killed, often just for the fun of it.

Indian 2: They took away what we needed to survive

Link with PSHCE Unit 5: Living in a Diverse World , looking at origins of slave trade – starting point for discussion on racial prejudice

Slave: Or the Mr. Innocence. It’s really not at all convincing. Not to anybody who had the dubious pleasure of being a ‘ship mate’ on board one of your slave galleys.

Sailor: Conditions were bad enough for us plain sailors!

Slave: Nothing, I can assure you, could compare with what we endured.  We were treated

worse than animals, and millions of us died en route.

According to slave codes, slaves were not allowed to learn to read and write, carry weapons, meet in groups or move about without permission.

Joel: So I guess we’re back to where we started – talking about that weird definition of equality in the Declaration of Independence.

Teacher: What an amazing story! What a long way we have come since those dark days.

Yes, but we should not become complacent. Racism is sadly not a thing of the past – there are still people who have prejudiced views.