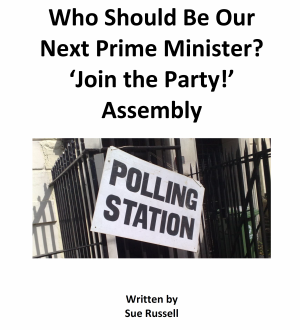 General Election Assembly. Who would envy our narrator the task of choosing a prime minister – from a class of 30?! The choice?  Football stars, movie stars, rock stars ….. and a whole lotta girl/boy attitude between the Spice ‘lot’ and a certain Direction! Somebody needs to tell them about equality – and who better than …. S Club 7?!

This is a very light hearted look at the coming election. The ‘possible candidates’ I have chosen are a selection of celebs – purely for entertainment sake.

For a more serious ‘take’,  the script could be adapted to include a far more serious list of people either now or in the past e.g. Gandhi, King, Mandela, Mother Theresa etc.

Likewise, whilst dealing with the current topic of the election, this script could be used for citizenship because of its PSHE component – this latter could be extended by adding a section on ‘What would you change if you were prime minister?’

Cast of 30 – easily adapted up or down; and characters replaced by children’s own choices.

Narrator:             (Blowing whistle) Excuse me! Since when did any of these footballers know anything about politics? They might be pretty good at running up and down a pitch, but running a country? I don’t think so!

(To Child 5) Yes, I can see why you might think Ms Ennis would set us all a fine example

Narrator:             Yes, yes. I totally agree! But there is a difference between running along those tracks

(To audience) Am I having a moment of déjà vu or didn’t I just say that a very short while ago?

Music 3 Theme music from Doctor Who

(To audience) You wait! It’ll be Superman, next!

Be the first to review “General Election Assembly” Cancel reply