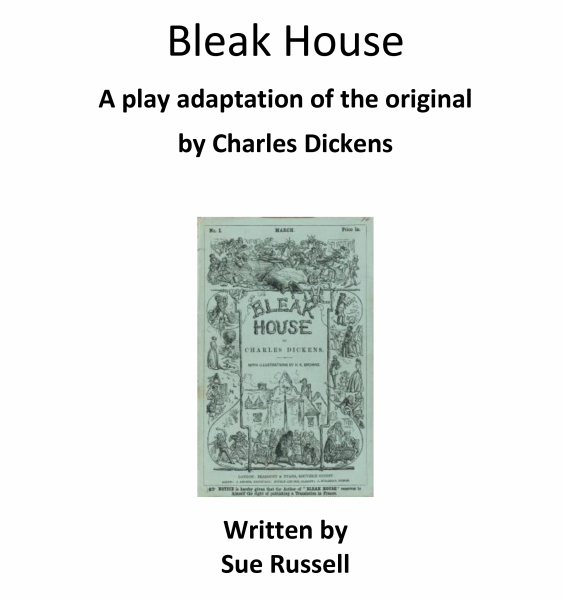 Did someone, somewhere, once say ‘Where there’s a will there’s a way’? … Wrong! They obviously hadn’t read Bleak House and the case of Jarndyce and Jarndyce!

Bleak House Play adaptation, Did someone, somewhere, once say ‘Where there’s a will there’s a way’? … Wrong! They obviously hadn’t read Bleak House and the case of Jarndyce and Jarndyce!

This script can be used by a small group of five or a whole class of 30.

With the job of narration shared by an extremely *non-neutral narrator and co-presenter who is the story’s heroine, this is a fun account of one very complicated story – don’t worry, it has been simplified!

*P.S. I hope nobody in the legal profession reads this – I’ve heard slander can be costly!

There are 30 speakers in total, divided up between seven scenes.

There are 13 named characters plus 6 lawyers (in the first scene) and the Narrator – i.e. 20 speakers in all.

So the actual cast size is somewhere between 20 and 30 – though this number can be easily adjusted by e.g. reducing or increasing the number of lawyers – I have used 6 lawyers in the first scene just to round up the total number of speakers to 30.

However, the script could be read by a group of 5, obviously adapting different roles in each scene.

I have two apologies! Unlike our ‘neutral narrator’ I offer an unreserved apology to all you hardworking and honest lawyers out there. The lawyers in this script are representations of a different time so apologies if I have caused offence to the legal profession .. I hope this isn’t going to cost me!

Second apology. Having read about a third of Bleak House (the original) I didn’t make it to the end before writing this script. I absolutely loved what I read and maybe one day I will do an extended version to include all the wonderful characters I came across but was unable to include due to time constraints. I did dip into abridged versions but found a bewildering number of contradictions. I hope my version has stayed true to the original. Like all the Dickens I have read, Bleak House has been a challenge – but in a good way. I found the number of sub-plots extremely difficult to ‘keep up with’ – I had to keep retracing my steps to work out who was who and how they were connected! And I found the number of characters rather bewildering – again, I had to keep a list! The language Dickens uses is magical and the book (that I am still reading) is a mass of underlined quotes – again, which I hope to include in a longer version with probably a different format – re-telling the original story – sometime in the future.

My aim as a writer of these scripts is to present them in a fun, accessible way. Much as I love Dickens work, I can totally understand why so many of his books remain gathering dust on library shelves – a great shame as a lot of his work will remain unread, I suspect, by the vast majority of us. It is actually only recently I have come to appreciate his writing and although I am gathering an impressive collection of his works, I know that most of them will sadly remain unread in their entirety. It is my hope that by presenting them in this simple formula – kind of conversational pieces, that I may at least cast some light on the master’s works.

These are also available in Readers Theater format.