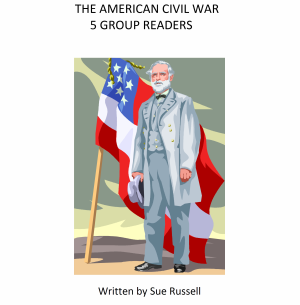 American Civil War Guided Reading is a set of 5 guided reading play scripts (Readers Theater) plus quizzes provide an overview and background to the American Civil War, plus an insight via ‘the winners and losers’ i.e. two different perspectives;  along with events after the war including Reconstruction; and finally an ‘interview’ with the First Ladies of this period and their take on what happened.

American Civil War Guided Reading is a set of 5 guided reading play scripts (Readers Theater) plus quizzes provide an overview and  background to the American Civil War, plus an insight via ‘the winners and losers’ i.e. two different perspectives;  along with events after the war including Reconstruction; and finally an ‘interview’ with the First Ladies of this period and their take on what happened.

Comment from a customer: “Easy scenes to set up. Nice flow to the dialogue. It was easy to incorporate music into the production!”

Davis: But what fine commanders we had! James Stuart – what a brave man he was!

Sojourner: Killed by his own men!

Lincoln: Not for us!

Davis: Just because he was the man to capture you and put an end to your little war games!

Lincoln: Huh! Don’t you mean, Pirate Semmes! Hardly the most law-abiding citizen! He sure wasn’t fussed about the rules of warfare! Whereas our fine commanders were ..

Sojourner: The face on our 50 dollar bill!

Davis: Fired by Lincoln! My! This is an interesting list!

Buchanan: Amazing that these 2 founding fathers should die on the same day, exactly 50 years after the Declaration of Independence was made public!

Harriet: The kind of story line even I couldn’t have thought up!

Lincoln: But it’s interesting that the very seeds of the civil war took root then – way back during your two presidencies.

Jefferson: Well, actually a little before. The original Declaration of Independence that I wrote contained a paragraph denouncing slavery. Maybe if I’d been allowed to keep that in the problem would have been confronted earlier and we could have saved ourselves that terrible civil war!

Buchanan: Well, in my opinion, such things are always best left to the government!

Lincoln: And it was that kind of ‘sitting on the fence’ mentality that forced us into having to take up arms.

Sumner: Quite so. Of course there were some of us prepared to speak out and stand up for what we believed in.

George B. McClellan (twice appointed – and fired – as commander of Union forces)

Lee: (Snorting) To think a little man like you could model himself on such a historical giant!

Strange to think how ‘Little Mac’ could have such a big ego!

Grant: And likewise with Mr. Booth here! To model himself upon Brutus! Oh dear! How misguided can you get!

Davis: Well, at least the end was quick for him. I had to sit out 2 years of miserable imprisonment at the end of the war – in a dark damp dungeon cell. That really wasn’t any fun!

Clara: And what on earth else did you expect? A medal?

McClellan: You were lucky there was never a trial

Grant: Quite so! Think of all those war crimes you could have been charged with!

McClellan: And then to be bailed out by a Northern newspaper publisher

Booth: One Horace Greeley! Where was he when I needed help?

Johnson: So much for Lincoln’s good intentions! He sure didn’t want the southerners punished!

Stevens: But you tried offering those rebellious states full membership in the Union! All they had to do was abide by the constitution and honor their agreement to outlaw slavery! And did they?

Johnson: Well, most of them did!

Stevens: But not all! What about Louisiana passing those ‘Black Codes’ restricting the freedom of African Americans so shamelessly?

Johnson: And how convenient for you – the perfect excuse for you to lead that Joint Committee on Reconstruction and not just impose your power over southern states, but me as well!

Hayes: That Tenure of Office Act! I don’t suppose many presidents would accept such an attack on their powers lying down!

Johnson: I certainly wasn’t going to be bullied in this outrageous way!

Cadozo: But then you played right into their hands!

Stevens: Suspending your secretary of war, Edwin Stanton! Just because he was one of us!

Johnson: I can’t think of a better reason for getting rid of him!

Grant: But even I, with my limited grasp of politics, could see you had to work within the constitution, however much you might disagree with it!

Forrest: Quite. No good stamping your feet and acting like the stubborn, short-tempered buffoon you were coming to represent at those senate meetings.

Hayes: ‘Keeping up appearances’ is so important in this game!

Forrest: Shame about that drinking problem you, Mr. Hayes, had!

Interviewer: Forgive me! I was forgetting you were the only First Lady to have lived in two White Houses! But tell us about the entertaining you did at the second – am I right in saying, absolutely no expense spared?

Julia: I did like to be the hostess with the mostest!

Mary: Like me! But all I got was criticism!

Interviewer: Well, I guess times were a little different after the war.

Julia: And my Ulyss was such a hero of that war

Varina: Though something tells me some of these wives enjoyed the limelight rather more than their husbands!

Julia: You still whingeing? Just because some of us knew how to enjoy ourselves!

Eliza: And I was no exception. I might have had to hand over my hostessing duties to my daughter Martha, but I had plenty of grandchildren to keep me occupied.

Mary: Poor lady. She never did recover from that heartless eviction from her family home, at a time when her health was so poor.

Varina: At least it was just her physical health that went! Not her mind!

Mary: (Shrieking) Are you brazen enough to suggest I ever lost mine?